Gabrielle "Coco"Chanel broke all of the rules in fashion when she began designing in France.  Suddenly, gone were the corset and feathers. She wanted women to be comfortable as well as chic, bringing slacks, bathing suits, and her most treasured fragrance ever, Chanel #5 into being. My own Mother who could never afford a classic Chanel suit, sought out the most luxurious wool fabric and the perfect trim, painstakingly making a spring suit for herself, down to the minutest of details.

Enjoy this collection of never before seen photographs as an intimate and exciting portrayal  of her life, published to coincide with the 125th Anniversary of Mademoiselle Chanel's birth!


Mr. Kirkland went on assignment to film Coco Chanel in 1962 and ended up forming a tremendous bond, actually living with her for three weeks while filming. Kirkland has photographed other beloved icons and luminaries such as Marilyn Monroe, Man Ray, Judy Garland, Elizabeth Taylor and numerous others.


Thank you to Glitterati Incorporated for the publicity copy of Coco Chanel: Three Weeks/ 1962.


Please do add this wonderful book to your art library; it is also available in a limited edition format at your favorite bookseller or at  Glitterati Incorporated. It is filled with some of Chanel's most memorable quotes and images.


Much thanks go out to my Family, Friends, and Followers who support The Arts!

I hope you will leave a comment as they make my day!
To receive notification of my latest features sign up for email alerts! It will astonish you that this comprehensive volume of Twombly's later works began when he was already 75 years of age, yet this iconic author produced a body of work so large in scale, dynamic in gesture, and vivid in fervent saturated color. It is very interesting to see the change from some of his earlier works which I have included.

Twombly's career really began in New York City in the early 50's when he worked alongside other great artists, Robert Motherwell, Robert Rauschenberg, Franz Kline, John Cage, Jasper Johns and others. It was also the time of the Jackson Pollock and de Kooning's art explosion.


A very private man, Twombly avoided publicity and let his work speak for itself. Well traveled , well read, he had homes in Lexington Virginia and Gaeta, Italy, both with spacious studios. 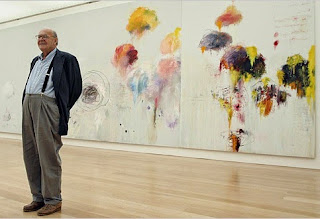 Twombly works  or art are filled with his favored motifs of ancient symbolism, ships, flowers, poetry, and mythological references. Even at this last stage of his life, painting was so fundamental, so essential to Twombly that he produced art of such scale and intensity, that to see it in person is breathtaking. Most of these works have been shown extensively at The Gagosian Gallery in New York City. 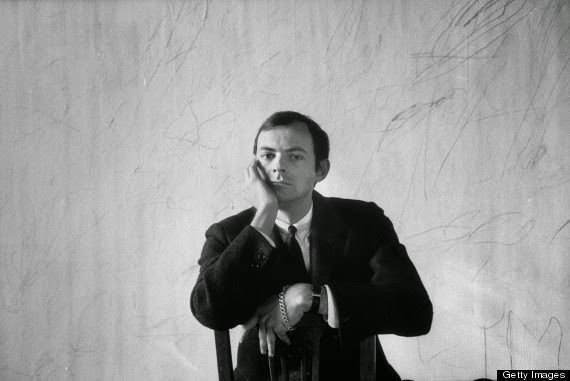 Consider purchasing this book for your library; it is full of the monumental and stunning works of art created in Twombly's  later years. http://thamesandhudsonusa.com/books/cy-twombly-late-paintings-2003-2011-hardcover

My thanks to Thames and Hudson for the review copy of Cy Twombly: Late Paintings 2003-2011.

The author Nela Pavlouskova studied art aesthetics at The University of Paris, Sorbonne, where she wrote her PhD thesis on the works of Cy Twombly.


Thank you to my Family, Friends, and Followers who support The Arts!
Please sign up for email alerts to receive notification of my latest features and I hope you will leave a comment as they make my day! 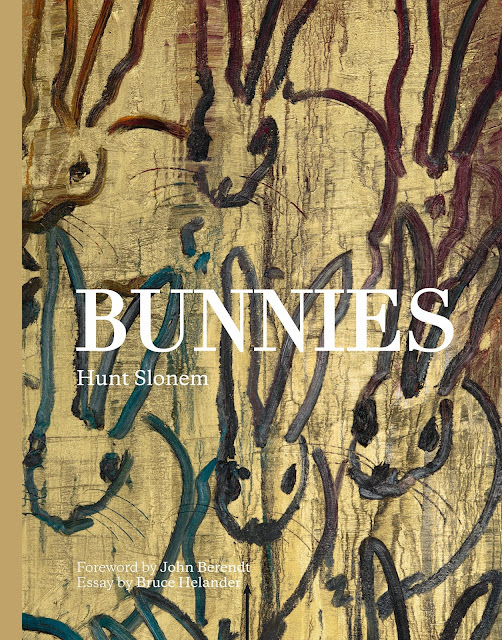 From Bunnies by Hunt Slonem, © 2014, published by Glitterati Incorporated www.GlitteratiIncorporated.com


This delightful book encompasses  a lyrical and engaging body of work by artist Hunt Slonem.  There are Bunnies abound and they seem to scatter all about, many leaping off the canvases and then some sitting and posing demurely like one Hunt would see sitting in his backyard when he was growing up in Kittery, Maine.

Mr. Slonem is a world renowned artist: a painter, printmaker, and sculptor who has exhibited in more than 350 galleries and museums worldwide. Some of these include The Solomon R, Guggenheim, The Whitney Museum of American Art, and The Metropolitan Museum of Art in New York City.

Many of his early works also included animals, birds and fish, painted in an abstract or an impressionistic way. There are many explanations in the book of the absorbing appeal that rabbits have for him, as well as children and other adults. I will let you discover these for yourself when you add this inspired book to your library!!

This is a visual feast, a truly luxurious book which is designed and crafted like a work of art. Luxe, with golden endpapers, edging, and bookmark, all with a printed protective outer cover. A fabulous addition to your collection, you may purchase at your local bookseller or at Amazon.com .

John Berend, who wrote the insightful forward for Bunnies, is an American author, well known for writing Midnight in The Garden of Good and Evil, which was a runner up for the 1995 Pulitzer Prize for Nonfiction.

Bruce Helander, who wrote an exceptional essay for Slonem's book, is an American artist and Fellow for the National Endowment for The Arts. He is also a well-known artist, art curator, national juror and writer. He published the Art Express magazine.

Thank you to Glitterati Incorporated for my review copy and for the use of these inspirational images.

Please sign up for email alerts to receive my latest posts and do leave a comment as they make my day!

Thank you to my Family, Friends, and Followers who Support The Arts!

xoxo
Karena
The Arts by Karena
Posted by Karena at 7:00 AM 22 comments: